Mandsaur a city in the Malwa region and North-West district of Madhya Pradesh state of central India is famous for its beautiful temples and other monumental remains. There are plenty of sites to visit in this busy yet beautiful city of Mandsaur district. Situated on the bank of Shivana River it is known for its archaeological and historical heritage and traditions.The most common language spoken in this area is Malwi, which is a mixture of both Rajasthani & Hindi language. The city is also famous for large production of Opium around the world. The slate pencil industry is the main industry of the area.


Places of Tourist Interest in Mandsaur

There are numerous famous religious and secular places to visit while traveling to Mandsaur. With a host of exciting things to do in Mandsaur, travelers can thoroughly enjoy the exploring the famous destinations. From temples to caves Mandasaur has everything to excite those looking for extra fun on their vacation. The main attraction of Mandsaur is Lord Pashpupatinath Temple. Apart from temples there are lakes and caves in the city which are very popular among tourists. 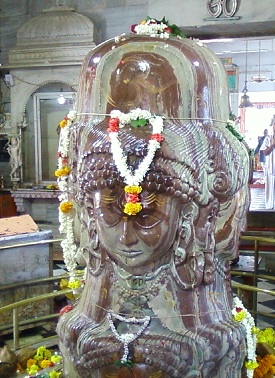 The temple dedicated to Lord Shiva is the most known and highly visited temple of Mandsaur. Popular for its eight-faced Shivalinga, the temple is situated on the bank of Shivana River. Weighing 4600 kg it is about 7.25 ft. high in curvature and 11.25 ft. in straight.The beautifully constructed Shivlinga has 8 heads divided in two parts. First 4 heads on the top and second 4 head bottom. Top 4 heads are clear, refined and complete then 4 bottom heads are not refined. This beautiful Shivalinga presents the blissful image of Lord Shiva.

The whole temple is very beautifully carved and decorated. With four doors in the four directions the entrance of the temple is situated in the west. The west facing image of Lord Shiva presents fearful image. The effigy’s heads with three rasp (relish) and bun-shaped hair with poisonous snakes, emerging third eye opened injects fear into the hearts of sinful. In the centre tangled hair are surrounding snakes that is acquainted annihilation Omkar (Veda mantras symbolizing God almighty).

The temple of Lord Shiva and Vishnu, Dharmarajeshwara Temple is one of the popular temples of Mandsaur. It has the 9th century monolithic temple of Dharmarajeshwara, carved out of solid natural rock. The temple is carved out of a rock of size 50 metre in length, 20 metre in width and 9 metre deep. The temple is rich in architecture and also can be compared with Kailash Temple of Ellora.

There is a big temple in the middle 14.53 metre in length and 10 metre in width. Around the main temple there are seven small temples. There is a big Shivalinga in the main temple along with a statue of Vishnu. The entrance gate of the temple is engraved with the figures of Vishnu and Lakshami. There are statues of Bhairava, Kali, Shiva, Garuda and Parvati. 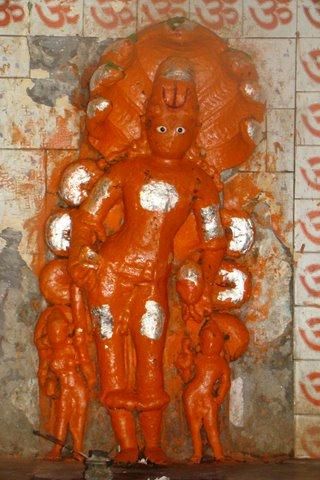 Taxakeshawar or Takhaji is a religious and historical place in Mandsaur district. It is situated at a distance of 22 km from Bhanpura town on Hinglajgarh road. The temple is dedicated to serpent King Taxak, who is worshiped here as Taxakeshawar.Local people call him Takhaji. It is only temple dedicated to Nagaraja Taxak. Seven serpent hoods protecting Taxaka image is revered in the region.In one hand of Taxaka is shown a human head. On one side is shown his wife and his son on other side.A hot water natural water spring pool with varieties of fish is major attraction near the temple. Every year on every Purnima of Baisakh month of Hindu Calendar grand fair is organized in the region. Rich in history, the temple is devotees throughout the year. It’s a fascinating place to see.

The Nalcha Mata Mandir is also one of the famous temples near Mandsaur. It is situated 3 kms from Lord Pashupatinath temple. The shrine takes festive look during Navaratri when devotees from across the region throng to seek blessings from the divine deity. Inside the temple, there is a beautiful idol of Nalcha Mata decorated with glittering clothes and jewellery. Daily aarti is done in the presence of priest and inhabitants of the region.


Other Interesting Places to Visit in Mandsaur 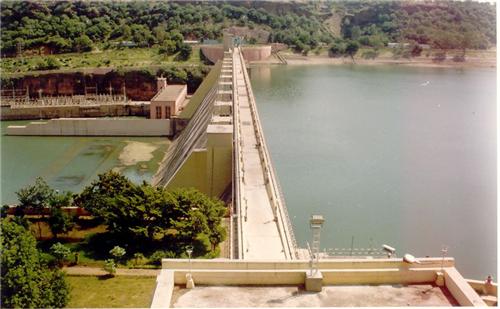 Gandhisagar Dam is the only dam of this region and is constructed on the famous Chambal River. The power station of the dam is 65 meter long and 56 feet wide. The foundation stone for the construction of dam was laid by the Prime Minister Pandit Jawaharlal Nehru in 1954. The work was started in 1957 in the power station, while power generation and its distribution commenced in November, 1960. The Power Station has five turbines of 23 M.W. capacity, thus having a total installed capacity of 115 M.W. This is the only dam which supplies electricity throughout the District. Besides meeting the power requirements in the District, electricity from this power house is supplied to such far off places in the Madhya Pradesh and in Rajasthan state.The dam is a must place to visit as it gives immense feel of the beauty of Chambal river.

The only wildlife sanctuary of this region, Gandhi Sagar Sanctuary is situated on the northern boundary of Mandsaur and Nimach districts in Madhya Pradesh. It is spread over an area of 368.62 km squire adjoining Rajasthan state in India. The popular Chambal River passes through the sanctuary and divides into two parts. The river adds on another point to the beauty of this sanctuary. The western part of this sanctuary is in Nimach district and eastern part is in Mandsaur district.

This sanctuary is the favorite place for the citizens looking for a place to plan picnic. Educationists and researchers visit this place in large number to extract deep study on this sanctuary. It’s a fun to visit and explore the flora and fauna of this place.

The Buddhist caves are located 40 from the Mandsaur city. Carved into the rough laterite rock of the hill-face, these Buddhist caves were constructed in 5th century AD. These caves were discovered by James Tod, an officer of the East India Company in the early 19th century. Although Tod described these as Jain caves and said there were 170 of them, this was disputed by later scholars, including Alexander Cunningham, who identified the caves as Buddhist and their number as about 70. Rich in history, the caves are known for its interiors and unique architectural work. People visit this place to spend some peace of time along with friends and family members. 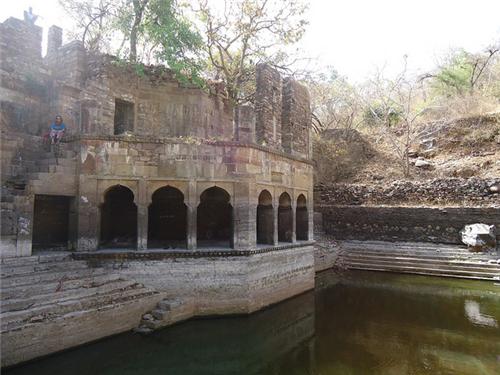 Hinglajgarh Fort is situated in Mandsaur district at a distance of 18 kms from Bhanpura on way to Gandhi Sagar. The fort is covered in an apsidal deep trench, situated on a hillock the fort can be approached from northern side only .There is Mandeshwari Nallah to west of the trench, which flows southwards. It is said that the architectural work of this fort originally belongs to Parmara period. The fort has the typical features of a forest fort, a mountain fort, a water fort and arches were built there on per injunction of the shastra. The fort has four entrance gates. The fort suffered considerable damage during invasion from Mohammedan rulers .The gate of inner wall that divides the entire fort is called Ganesh poll. Beyond it towards the eastern slope there exists the Suraj kund .It belongs to Parmara period and its Baradari was built in 18 century AD.

Rock Cut Caves, Khejadia Bhoop Khejadai Bhho Caves are situated in the tehsil Sitamau of Mandsaur district. It is at a distance of 3 kms from Khejadia Bhoop of Mandsaur. These are 28 Caves and were made by cutting the hills for residential purpose for Buddhist monks. The cave has small cells and verandahs in front partion. Some are single caves and some are inter connected. The Stupa inside the caves is the most attractive thing of this place. The architecture of these caves reflects features of the architecture of Gupta period.

The popular Pola Dunger caves have preserved the memories of the Buddhist religion in Dashpur region in its caves. Situated 128 km from Mandsaur it is constructed on a small hill (dungar) which has been made hollow (pola) by the architects in their effort to construct caves. That is how it derives its name Pola Dungar meaning hollow hill.These caves were made of red stone and seems belonged to the Hinayana sect as they are totally devoid of the images of the Buddha. Initially there were about 100 small & big caves over here, however, due to the bolt of time and nature only few of these have survived. Most of these caves were used as viharas. The main entrance of these caves are known as Surajpol. There is also a Stupa inside the caves having a square base of 3 meter. This region has the largest number of Buddhist caves. Tourists visit this place in a large number every year.

Popularly known as Teliya Talaab, the Teliya Tank is the largest tank of this region. It is a source of the water for the city and also a famous tourist attraction. This particular lake has developed into more of a family and friends gathering place with beautiful park and a temple near by. Most of the inhabitants of the region spend their time here in the evenings and or the holidays.


The Rock Paintings of Chaturbhujnath Nala

Situated approximately 30 kms north of Bhanpura, this place is a rock shelters stretching in a 5km long 'gallery', with thousands of figures painted on its walls. Of this long gallery of spectacular rock paintings, about 700 m are easily. Chaturbhujnath Nala is located within the Gandhi Sagar Sanctuary.
The place is very much visited by students and researchers and also by well known architectures and painters. All the articles of this place are made by renowned personalities of the country.

Mandsaur is very well connected to other states and cities through different modes of transportation. There are local taxis and autos available in the city to commute to different places. Also inter-state and public buses are available for the easy movement inside the city. While NH-79 connects it with Ajmer and Lebad(Indore) SH-31 links it to Mhow and Neemuch. Mandsaur junction under Ratlam rail division of WR is situated on Ajmer-Akola track.There is direct train for Agra, Ajmer,Indore, Ratlam, Ujjain, Mumbai, Kolkata, Hyderabad, Jaipur, Udaipur, Kota and Bhopal.

Mediums to travel in Mandsaur

Local transport of the city comprises of auto-rickshaws, taxis and buses. You can board a bus to commute from one part to another part of the city. Hiring an auto-rickshaw or taxi will be fruitful whenever looking to save time. 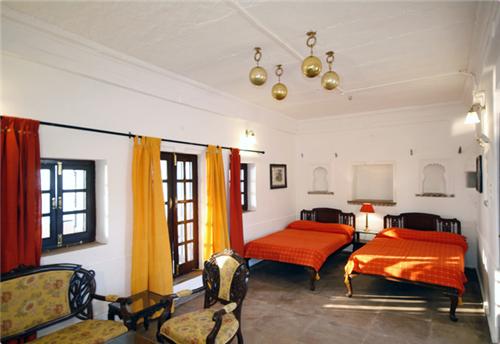 The city of Lord Pashupatinath, Mandsaur, witnesses influx of tourists and visitors throughout the year. Here you can find some of the popular budget hotels that ensures same comfort that you were looking for. Hi-speed internet facility, car rental services, 24-hour room services, medical and emergency services, are some of the features of the hotels in Mandsaur. The hotels rooms vary from standard to family and so the cost. Below is the list of popular hotels in Mandsaur.

Mandsaur At A Glance