Mandsaur city the administrative headquarters of Mandsaur District and a part of Ujjain Division is situated on the borders of Malwa and Mewar. Mandsaur is situated on the bank of Shivna River.The city is famous for is architectural beauty of temples. Mandasaur City got its name when two of the villages Marh and Saur were merged to create the name of the city. The town was known as Dashpur in ancient times. 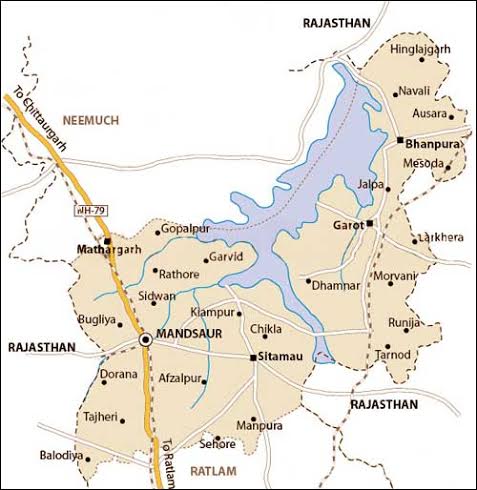 The District with four sub divisions and eight Tehsils has population of 1,339,832. Mandsaur, Malhargarh, Sitamau and Garoth are the major sub divisions of the district. Similarly Mandsaur, Malhargah,Bhanpura,Shamgarh,Garoth,Dalauda,Suwasra and Sitamau are the eight Tehsils. Mandasaur with a population of 1,339,832 has a population density of 242 inhabitants per square kilometer. The city has a sex ratio of 966 females for every 1000 males, and a literacy rate of 72.75%. Mandsaur with a literacy rate of 72.75% is higher than the national average of 59.5%: male literacy is 78%, and female literacy is 64%. In Mandsaur, 13% of the population is under 6 years of age.

The Mandsaur city is situated on the bank of Shivana River. The famous temple of Mandsaur Pashupatinath Temple is situated on the banks of the Shivana River. Pashupatinath Temple is one of the prominent temple in Mandsaur . Also the famous Chambal River of India flows from Mandsaur . The Chambal River passes through the famous Gandhi sanctuary of Mandsaur . These two rivers acts as a major source of water in the district.The water of the rivers are used for variety of purposes. The residents of the region use the water of river for the drinking and basic purposes. The water is also used by the industries and factories around the river. Many tourists visit riverside to witness the beauty of nature. The Shivana River is one of the most visited attractions of Mandsaur city.

Mandsaur city experiences dry climate except in south-west monsoon. From March to the middle of June it is hot. The days are intensely hot in summer and hot dust-laden winds which below during this season add to the discomfort. Thereafter the south west monsoon season starts and continues upto about the middle of September.The average annual rainfall in the District is 786.6 mm. Cold season starts from December to February. In terms of temperature, the District has rapid increase in temperatures after February. May is generally the hottest month and January is the coldest month.

Mandsaur At A Glance