For those looking to explore wildlife on their visit to Mandsaur it is wise to take tour of Gandhi Sagar sanctuary which is located between Mandsaur and Nimuch district. It was established in 1974. The total area under this sanctuary is over 368.62-sq-kms. The sanctuary is divided into two halves, western half and eastern half by Chambal River. The western half lies under Nimuch district and eastern part is under Mandsaur district. The best way to enjoy your tour is to hire an open jeep for an adventurous and memorable trip to the jungle.

There is a variety of terrain of wooded hills. The forest is a great combination of dry, deciduous and mixed flora. The area around Gandhi Sagar dam is flat grassland. There are a number of places which proof to be the good hideouts for the tourists to watch the wildlife in Gandhi Sagar Sanctuary. Some of the important tress found here are Tendu, Khair Acacia catechu, Dhawda, Kardhai, Salai etc.


Attractions of the Sanctuary

The most spotted animal of the sanctuary is deer. Some of the commonly found animals are deer, nilgai, leopard, Indian gazelle, peacock, wild dog, sambar, otter, crocodile etc.There are wide variety of bird species that can also be seen here. You can hear the call of deers and other animals in the jungle. Further the freeflowing waterfall and the surrounding forests further adds charm to the region. The best time to visit the sanctuary is said to be April and May. 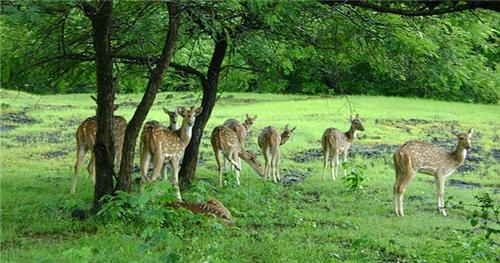 If you visit the sanctuary between this time the chances of spotting the wildlife is maximum. Chaturbhujnath temple dedicated to Lord Vishu is located inside the Gandhi Sagar Sanctuary. On every 10th day of Bhadra month in the Hindu calender a vast fair is organized here on the occasion of Tejaji dashami. Chambal River and Gandhisagar dam provides a good picnic spots in the vicinity of the Gandhi sagar Sanctuary.


Tourist Attraction In and Around Gandhi Sagar Sanctuary

Bhadkaji rock paintings: These paintings are 1400 years old. And are of great interest for all the history and art lovers.

Hinglajgarh Fort: This fort is an important ancient monument. This fort shelters inside it many artistic sculptures from Guptas period to Parmara period. The fort has seen its golden era during Parmara rule. The oldest of its craftmenship are from 4-5th century AD.

Taxakeshawar Temple: An important attraction and spitritual place near the Sanctuary is Taxakeshawar temple. The temple is deicated to serpent king Taxak. Known as Takhaji to the localities. The temple is one of its kind and the only temple dedicated to king taxak.

Bhanpura Museum: It is located at a distance of 30 kms Gandhi Sagar dam. The museum displays a wide range of artifacts and crafts of various periods. The oldest of them is said to be belonging to 4 -5th century AD. It also displays popular arts from Mandsaur. Artistic sculptures from Guptas period to Parmara period are well preserved inside the Museum. It is a must visit for art and history lovers.

Dharmrajeshwar: Belonging to 4th – 5th century are ancient Hindu and Buddhist rock caves temple sites. They are also known as Dhamnar. They are the most important and interesting ancient monuments. They are of great importance both spiritually and archeologically. It has a series of 1417 century rock-cut Buddhist Caves with monasteries and Stupas.


How to Reach Gandhi Sagar Sanctuary ?

Gandhi Sagar Sanctuary can be reached by road from Mandsaur which is 135 km far and Nimuch at a distance of 100 km or from Rajasthan city Kota, 100 km apart. You can choose to travel in a private vehicle or hired taxis. You can also opt for the bus service, which is well maintained and provide a fair price service. Nearest airport is Udaipur in Rajasthan. Which is at a distance of 220 km from the Sanctuary. A rest house by Water Resource Department and the M.P.E.B. is also set up inside the Sanctuary for the visitors.